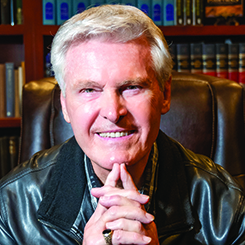 More than two decades ago, Dr. Ron Susek (Sue-seck) was captivated by Isaiah’s prophecy that included Assyria. That led him to amazing discoveries in researching for more than 13 years the plight of an unknown Christian nation that is destined for a major end-time role—Assyria.

When a recent attempt was made to obliterate the Assyrians for no reason other than being Christians, Dr. Susek felt compelled to write and speak about this current genocide and forced migration. Susek’s in-depth research of Assyrian and Middle Eastern history, linguistics, culture, and geo-political-religious movements uncovered the horrific
persecution and generational genocidal attacks on the Assyrian people. That has led to the current Assyrian critical need for security and national preparation to fulfill her role in Isaiah’s prophecy.

Ron is married to recording artist, Diane Susek. They live in Pennsylvania. 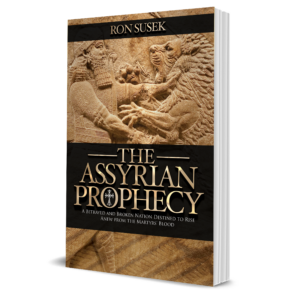 They're Talking About Ron Susek

“The clarion call to prophetic arms that Dr. Ron. Susek releases in his masterpiece crafting of The Assyrian Prophecy speaks in a Kairos voice to the body of Christ in the epoch of advancing God’s kingdom in the earth. This writing engages one’s individual participation and accountability in the casting of God’s vision, plans and promises for His chosen people. There is an enhancement of prophetic acuity that resides within this message of God’s forthcoming intentions of rebuilding and restoring the Assyrians. Hope is released as one reads this historical and future account.”

“Through in-depth research and with evangelistic fervor my good friend, Ron Susek, presents a challenge involving a wounded nation, Assyria, with the Biblical hope that will rekindle and revitalize a future that is grounded in scripture leading to the fulfillment of God’s prophetic plan and purpose. I personally look forward to the unwrapping of this biblical prophecy that will provide an umbrella of blessing for Assyrian believers that will spread throughout the world. I encourage readers to understand the biblical basis for this book and heed the challenge to rise-up to help a group that has unfortunately been overlooked. Thank you, Ron, for this work, and I prayerfully encourage followers of Christ to rise in prayer and activity to this challenge.”

“As a full-blooded Assyrian-American, I am amazed and overwhelmed in reading Ron Susek’s inspired book about Assyria and Assyrians. My Assyrian blood was boiling, and my soul was touched.”

“I have known Dr. Ron Susek as a trusted and humble friend. We worked together on special projects when I was Governor of Chuuk State, Federated States of Micronesia. Dr. Susek’s book, The Assyrian Prophecy, is a true testament of his passion and courageous determination to inspire God’s love and justice for all humanity. It is easy to read and invigorating. I am distinctively honored and humbled to endorse this book.”

“As Assyrians, we believe that the Scripture is the true word of God, therefore, all prophecies will be fulfilled in accordance to God’s time table. The attention paid by Dr. Ron Susek to the Assyrian cause has touched my heart and will touch the hearts of many Assyrians. This is due to the fact that it addresses the fulfillment of Isaiah’s prophecy which brings hope to a nation that has suffered so much for its belief. The Assyrian nation deserves its own sovereignty, through the reclaiming of its ancient land, known by its Creator as the land between two rivers. “I pray and believe that this work will be a turning point for us Assyrian people. The Assyrian nation is the cradle of civilization, being credited as the first nation to believe in Christ.”

“The wonderful work done by Dr. Ron reveals the suffering and injustice the Assyrians have endured for many centuries. Although the normal attitude is the hope of peace for these people, it is not possible to have peace unless injustice is eliminated. The Assyrian Prophecy is an eye-opening book that has stirred me to pray and do all that I can to see the Assyrian people justly resettled in their ancient homeland as a sovereign nation at peace.”

“Our Assyrian nation is passing through one of our darkest periods since the fall of Nineveh in 612 B.C. Assyria’s painful history records numerous broken promises, massacres and genocides. ISIS’ recent assault on our homeland has affected this tired and wounded nation significantly. Even the most optimistic Assyrian activists have almost lost hope for Assyria’s future. In The Assyrian Prophecy, Dr. Ron Susek has revitalized our hope for Assyria’s future when we, as the work of God’s hands, will rise like a phoenix out of the ashes of history to the glory of God.”

“The Assyrian Prophecy will grab your attention and grip your heart. I confess my woeful ignorance on the subject matter presented here and repent of it. I was moved to tears as I read the stories of many of my brothers and sisters in Christ who were and are persecuted so savagely

because of their faith. At points my tears turned to a sickening anger, more than that, it caused me to pray, to pray for my persecuted brethren and to ask our Father, ‘What can I do?’ This is the point of the book to inform you and make you aware of a grave injustice that is within our power to change. And to make us ask the question, what will we do to change this for the cause of our Christian family and for our King, Jesus Christ? Read prayerfully and receive the call to action from the author and hear the cry of the Assyrians beseeching the Christian community to help.”

The Assyrian Genocide and Research Center “The Assyrian Cause of which Dr. Susek writes, speaks to the fulfillment of one of the great prophecies of the Bible. It cannot, therefore, be separated from the Gospel message of the Great Commission. It is part of God’s overall redemptive plan for humanity.”

“For many centuries, we Assyrians have endured many persecutions and genocidal acts, all because of our commitment to Christ. Having been driven into obscurity, our relentless cries for help have often gone unheard. Dr. Ron Susek, however, not only heard our cry, but is working to deliver our message to the rest of the world. I have known Dr. Ron since he started working on this masterpiece. I believe this book may open the way for Isaiah’s prophecy about us to move toward fulfillment.”

“I am awestruck by Dr. Ron Susek’s courage to write this riveting book on the Assyrians, an ancient people who have given so much to the world and yet have remained in the shadows of history. The Assyrian Prophecy is draped in antiquity, inviting the reader to revisit one of the most important verses in the book of Isaiah. The Assyrian Prophecy inspires, encourages, and majestically gives hope for a future, one which leads all nations to God.”

“In engaging fashion, my good friend Ron Susek weaves us through history, current events, and future implications of the remarkably resilient Assyrian people and their place in God’s plan. This to me brings to light an aspect of Isaiah’s prophetic promises rarely considered in our era.”

“I would not be surprised to see what Ron Susek talks about in this book appear in international headlines, in the near future. As an evangelist, my heart soared to read about the ancient missionary passion of the Assyrian people. As I read this book, I discovered amazing truths about their history that will continue to inspire anyone who believes in the Great Commission. Every prophecy in the Bible will come true and I was delighted to see that God still has a plan for the heart of the Middle East. If you want to know what is coming, you need to read The Assyrian Prophecy.”

“I think that this book will reach from the White House all the way to Buckingham Palace and beyond because it is a revolutionary idea based upon a righteous cause. Dr. Susek, in The Assyrian Prophecy, builds our case based upon biblical authority. His research leads to irrefutable conclusions. Whoever disagrees with them will be opposing the almighty God’s project.

“An awakening has started from Dr. Susek’s literary achievement, which appeared suddenly and unexpectedly from the ‘unknown.’ He has risen to become a voice of the bereaved Assyrian nation. We have been trying for decades, even centuries to be heard with no results. Now, Dr. Susek has come in a different way, building our case from a biblical perspective, and faith is stirring anew.” —Ashur Giwargis Chairman of Assyria Patriotic Movement (APM) Lebanon / Germany

“The Great Defibrillator is what I am calling this book. It is causing our Assyrian hearts to beat with hope once again. Dr. Ron appears like our modern-day Jonah—a prophet raised up by God for this hour in history. “After so many persecutions, Genocides and broken promises, I like so many of our people, have truly come to a place where no human belongs, a state of hopelessness, concerning our plight as a nation. Then comes along a messenger of God, with a reminding message from the One whom we have believed, served, and died for since the beginning. I speak, of course, of the Lord Jesus Christ. “I not only endorse this book, but I believe that it is the answer to our prayers and the revival needed for our people. Glory be to God, the keeper of His promises and His servant Ron, who has submitted to the Will of his Master.”