Miranda Fay Pope, affectionately called Pastor Fay, is the Founder and Senior Pastor of Rapha Ministries International Church. In addition, she is the Executive Director of Naomi Focal Point, a mentorship program for women in transition, Founder of Grand Generation Publishing Company and President of Miranda Fay Pope Enterprises. Pastor Fay is a leader. In building this book, she turned to the best of the best and invited them to be contributing editors to this timely.

Selecting and inviting 30 wonderful writers, ministers and teachers to join you in creating a devotional was an exciting challenge in itself. However, the result was well worth the effort. ended in one of the most engaging devotionals written specifically for women. To all the contributors and writers, your encouragement and support have been epic. Thank you for your friendship. I’m honored to call you my “Girlfriends.”

Itinerary
This About That
They're Talking 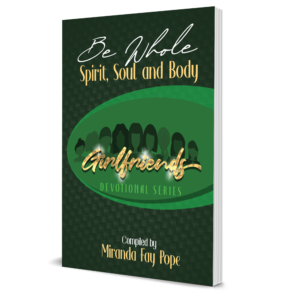 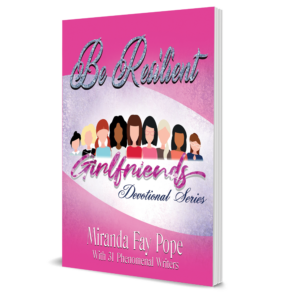 They're Talking About Miranda Pope

Blessed is the one who perseveres under trial because, having stood the test, that person will receive the crown of life that the Lord has promised to those who love him (James 1:12 NIV). It’s not surprising to me that Pastor Miranda Faye Pope would create a space for women to write their stories about being resilient. She has been a bold woman of faith who has stood the test of time and has had the ability and durability to bounce back from her set backs. Pastor Pope brings a wealth of experience and leadership in gathering and mobilizing women toward greater strength and inner power. Her motto “Love Never Fails” is demonstrated in the way she reaches out to meet the spiritual, physical, and emotional needs of people everywhere. All of us face storms that test our character and our faith. “Be Resilient” is an inspiring collection of stories from women who have went from tragedy to triumph, brokenness to blessings, and from pieces to peace. This compilation of real-life journeys creates a spiritual tapestry, which when woven together brings encouragement and hope in an uncertain time and season. It will not only stimulate and enrich you, but it will provide important keys to successfully getting to the other side of whatever obstacles you may be facing in these challenging times. As you read this book, allow it to enrich you, give you hope and heal you. These times demand that you stay encouraged. I know these stories about being resilient will inspire you, build your faith and bring you to a new level of trusting in God. A Woman That Has Been Resilient Elder Sheila Renee’ Vann Executive Pastor of Second Ebenezer, Detroit, MI Founder of Keep It Moving Ministries