Stacey Cormier was blessed to be raised in a home that honored God and made Him the center of daily life. After a period of wandering and searching to see for herself what life was all about, Stacey accepted Christ as her Savior and turned her life over to Him completely in 1996 at the age of 26. It was shortly after that decision that she began to experience physical challenges that ultimately led to a diagnosis of Primary Progressive Lateral Sclerosis. It was during this same time period that Stacey felt the call to full time ministry and answered it. She became a creden¬tialed minister with the Church of God, Cleveland TN in 2003 and went on to be ordained in 2013. Stacey served as youth pastor at Southwest Christian Center in Bakersfield CA from 2003 through 2019. She is currently still serving at Southwest Christian Center as an assistant pastor. She also serves as the founding pastor of Enabled by Grace Ministries which strives to preach the gospel with an emphasis on meeting the needs of those with disabilities and their families. 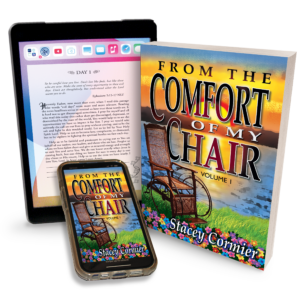 From the Comfort of My Chair

They're Talking About Stacey Cormier